Home > News > The Embassy’s news > The French Ambassador holds a press interview with the Bahraini newspaper (...)

Bahrain has succeeded in facing coronavirus

The Ambassador of the Republic of France to the Kingdom of Bahrain, Jérôme Cauchard, said that Bahrain had dealt accurately and transparently with the spread of the Corona virus (Covid 19), which made the French community’s sense of safety and confidence something surprising at all compared to other parts of this world. Considering that the credit is due to the Bahraini leadership, headed by His Majesty King Hamad bin Isa Al Khalifa. French Ambassador M.Cauchard said in a short video interview for "Al-Ayyam" last Tuesday, April 21st, that the early precautionary measures taken by Bahrain to deal with the spread of the coronavirus (Covid 19) had effective results, especially the closure of schools and gathering places, and conducting large-scale examinations and strengthening electronic services. In another context, French Ambassador M.Cauchard emphasized that clinical trials are now taking place, as clinical trials are conducted, as French research institutes such as Insirm are working hard, including Discovery tests that are based on a comparison between many treatments and medical products. He pointed out that the famous "Pasteur" Institute is now conducting research to prepare a vaccine in the hope that it will be able to produce it by 2021. Ambassador Cauchard explained that some French regions have suffered more than others - such as eastern France and the capital Paris - stressing that solidarity and unity formed a shared value shared by all citizens, whatever their geographical area, in order to reduce the risks of great pressure on the health care system, and protect the most vulnerable groups of society wherever They have been since the outbreak in France.

The following is the text of the interview:

More than 19,000 French people lost their lives out of a total of more than 151,000 French infected with the Covid 19 virus, which has become a veritable tragedy for the whole world.

1. What measures did France take to fight this global epidemic?

Almost all countries have to address the health emergency and economic shock caused by the Covid-19, with the same goals: to prevent the epidemic from spreading and to mitigate the short-term economic impact. The French Government decided to reduce interpersonal contact, to close all educational institutions, to close borders, to promote teleworking options… No half-measure can be enough. So ambitious measures were also taken in order to protect the productive capital of the French Economy and the income and jobs of workers, such as a financial package, up to euro 110 billion euros, and loan guarantees up to 315 billion euros. At the same time, 150,000 French citizens were stranded abroad. They were flown home in an unprecedented repatriation move. In this respect, Gulf Air was very helpful.

2. Is the virus concentrated in certain regions or is it distributed consistently across the country? Especially since France has the best health systems in the world?

It is true to say that some regions suffered most, as the East of France or region of Paris. But since the outbreak of the pandemic, solidarity and unity were a common value, shared by all citizens whatever their geographical region in order to minimize the risk of overloading health care structures and protect the most vulnerable groups of society wherever they are. This is critical to reduce human losses due to the epidemic. And the French President also called for a coordinated European response.

3 . Is it French medical research for this virus? Is there optimism concerning this virus?

Clinical trials are already underway. French research Institutes like “Inserm” are working hard. For example, a trial named “Discovery” is comparing several treatments and medicinal products. And the famous “Pasteur Institute” has started researches to elaborate a vaccine hoping to be able to produce by 2021.

4. How do you assess the precautionary measures taken by the Kingdom of Bahrain to limit the spread of the disease, and the medical efforts that are made to protect society, whether citizen or resident ?

There is no vaccine yet. So every country has to address the epidemic with a specific mix of measures. In the medical field, these measures share a common inspiration (Test, Treat, Trace), but the set may differ. In Bahrain, precautionary measures were taken at an early stage, like the closure of schools, the choice for large scale testing, e-services in the administrations or self-isolation. The pragmatic rather than dogmatic approach of the authorities and the National task force is efficient. Measures evolved and are still evolving according to the development of the outbreak. It is fine – and transparent - tuning. So it comes as no surprise that the French community of Bahrain feels confident and more secure here than in many places abroad. We are grateful to his majesty King Hamad and to the Kingdom of Bahrain

Lastly, let us not forget that life goes on, despite the virus. Ramadan Mubarak to all! 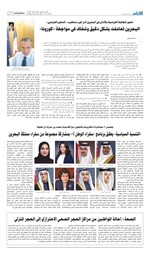