The COVID-19 pandemic has caused the death of millions of people and disrupted the lives of billions more. Global equitable access to vaccines that are effective against COVID-19 is essential to reduce the impact of this pandemic. That is why France has made vaccine donations one of its priorities, to support vulnerable countries which have been shaken by the pandemic and help increase vaccine cover on a global scale.

With a virus that knows no borders, nobody is safe until everybody is safe. Solidarity is our best weapon in fighting this pandemic and vaccine donations are an essential component.

At the Paris Peace Forum in November 2020, President Macron called on the international community to act immediately by donating doses to support developing countries suffering from shortages and unequal access to vaccines. The President has since committed that France would donate 120 million doses by the end of first-half 2022. A total of 79.7 million French doses have since been donated and 61.1 have been delivered. France is a driving force in this initiative, making it the country having allocated the third greatest number of doses out of the G7, following behind the United States and Germany.

"France is making global vaccine coverage a priority and remains determined to rally the international community in support of the countries hit hard by the pandemic."

France focuses its efforts on the most vulnerable countries, which have very fragile healthcare systems and less access to vaccines, giving more to low- and middle-income countries benefiting from the COVAX mechanism. It has already allocated 42 million doses to partner African countries, including 10 million through the African Union and its AVAT programme. In January 2022, 40 African countries had received French doses, and we are continuing our efforts to help this part of the world. 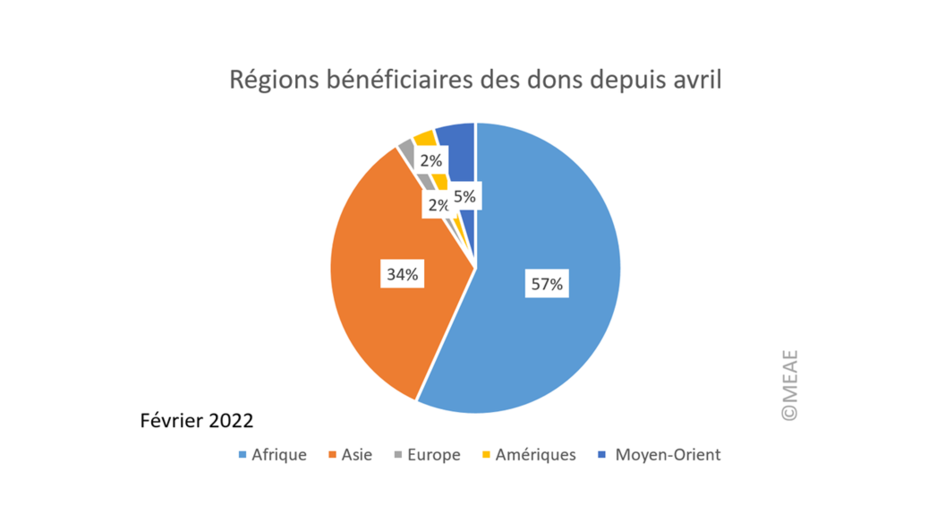 These donations are made up of the same vaccines used by France in its vaccination campaign – AstraZeneca, Pfizer, Janssen and Moderna. There are enough doses to vaccinate the equivalent of the French population, at least (every French citizen will have given one other person in the world the opportunity to be vaccinated). Donations began at the same time as the vaccination campaign in France. They are a significant financial contribution in the spirit of true solidarity.

The COVAX Facility, which brings together international partners such as Gavi, the Vaccine Alliance, and UNICEF, has been supported by France and its European partners since its creation in April 2020. Its aim is to enable the development and production of safe vaccines against COVID-19 by organizing the purchase and delivery of vaccine doses for low- and middle-income countries, in line with the WHO-approved global allocation framework for fair access and effective vaccines. It also helps higher income countries that want to buy the vaccines for themselves (“self-financing” countries).

The aim of this unique facility is to enable vaccine coverage of at least 45% of the population in developing countries by mid-2022, targeting priority persons. With more than one billion doses sent in January 2022, COVAX is the most concrete multilateral response to truly making COVID-19 vaccines a global public good.

An action that demonstrates the effectiveness of multilateralism at work

Dose donations quickly became essential to support the COVAX campaign. These donations currently represent almost a third of the vaccine doses delivered by COVAX and are therefore instrumental to speed up vaccination campaigns all around the world and combat the development and spread of new variants that threaten the progress that has been made in the pandemic response. 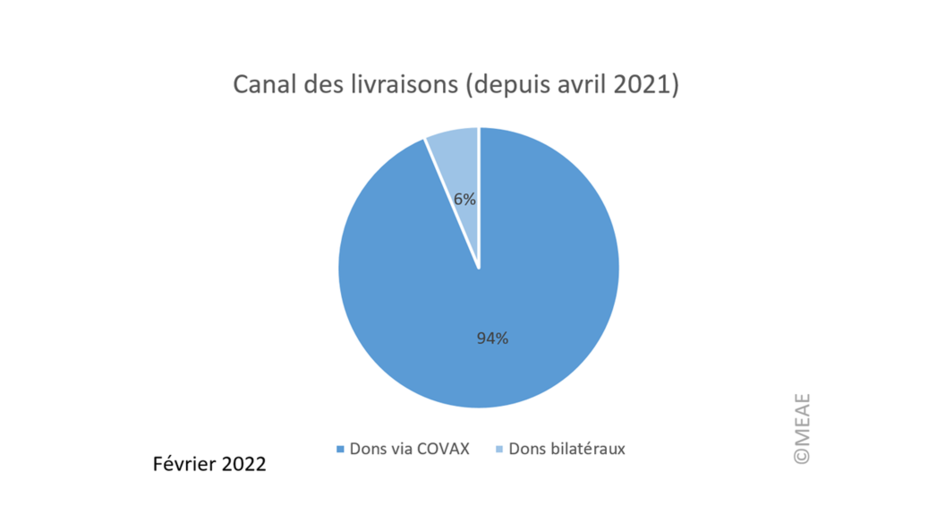 The French approach is part of a collaboration with the major international health organizations (WHO, UNICEF and Gavi, the Vaccine Alliance), beneficiary countries, civil society actors, particularly those on the ground and regional organizations such as the African Union and its AVAT mechanism, with which a partnership helped deliver 10 million doses of the AstraZeneca and Pfizer vaccines to African countries in autumn 2020.

An interministerial Task Force, headed by the Minister for Europe and Foreign Affairs, Jean-Yves Le Drian, was set up in summer 2020 to organize and monitor donations of COVID-19 vaccines. It brings together the relevant departments of the Ministry for Europe and Foreign Affairs and the Ministry of Solidarity and Health in collaboration with the diplomatic and cooperation network, which is fully mobilized on the issue.

Timeline of agreements signed by France for COVID-19 vaccines:

Table of completed deliveries , Map of deliveries and Trajectories of donations on the website of the French Ministry for Europe and Foreign Affairs